A microbial source tracking (MST) study was designed to identify and quantify fecal bacteria sources in Vaughn Bay on the Key Peninsula in Pierce County, Washington. Shellfish harvesting continues to be restricted in Vaughn Bay despite long-term efforts to control fecal sources from 43 farms and 530 registered on-site septic systems in the 3,600-acre watershed. Water samples were collected from 7 freshwater and 3 marine stations during 4 baseflow and 3 storm events. Two MST methods were used in the study: 1) quantitative polymerase chain reaction (qPCR) of 7 fecal host biomarkers using non-library Bacteroidetes methods and 2) Next Generation Sequencing (NGS) of five fecal host categories. A total of 88 fecal source samples were collected from septage and animal feces in the watershed to validate qPCR accuracy and build the national NGS library with local sources. The qPCR results were found to be highly accurate and the NGS results did not vary much between the local and existing library sources.

The qPCR results indicated that bird was the most prevalent fecal host followed by ruminant (sheep/goat/llama/deer) (Figure 1 top). Dog was typically less abundant, cow and horse were rarely detected, and pig was never detected. Total biomarker DNA concentrations were of similar magnitude in the freshwater and marine sites during base flow, and were much higher during storm events in both forks of Vaughn Creek and all three marine stations but not small drainages. Fecal host abundance changed to high human and low ruminant when DNA concentrations in water samples were normalized by the amount of DNA found in the host feces samples (Figure1 bottom), which is an important consideration often overlooked in MST studies. Fecal host DNA loadings to shellfish beds varied directly with basin size where small streams and drains contributed negligible amounts. The study results indicate that other shellfish growing areas fed by rural watersheds are likely impacted primarily by large freshwater inputs rather than marine fecal sources.

The NGS results similarly showed that bird was the most prevalent host, followed by human and not ruminant. Livestock, dog, and deer were detected at very low levels and the deer amounts were higher than livestock, suggesting that deer was the primary component of the ruminant detected by qPCR.

Source control actions were identified based on the study results. The low livestock loadings suggest that farm BMP inspection and education have been effective in this watershed, but more work is needed to control septage loadings. MST study protocols were developed for other Puget Sound shellfish recovery projects. The report is available at: https://www.herrerainc.com/publications/ 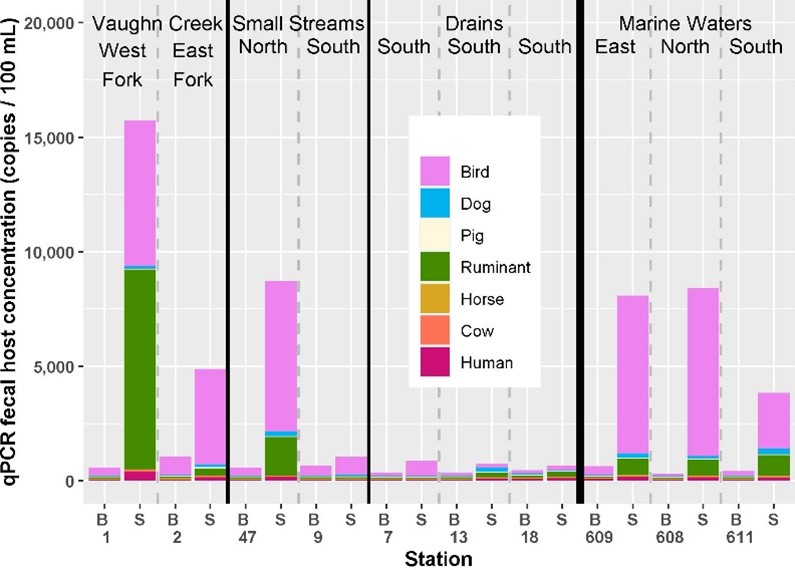 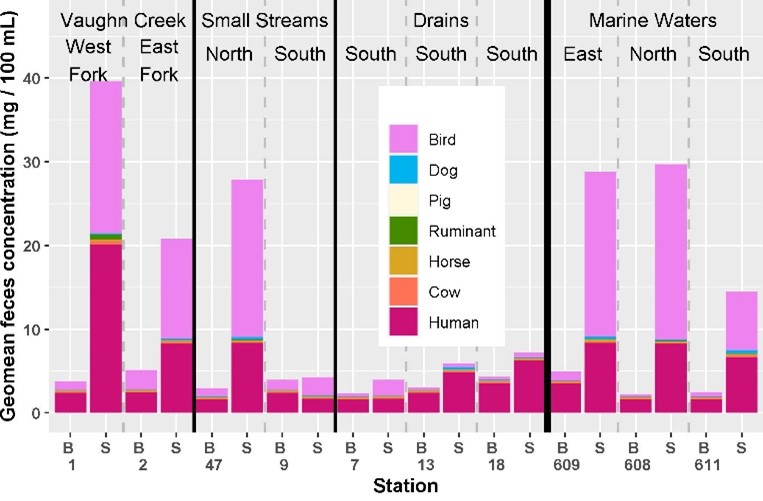 Evaluating Establishment of a No Discharge Zone in Puget Sound

Stormwater Infiltration and Impacts on Groundwater