On this World Water Day, Herrera reflects on the trends, research findings, and best practices of stormwater management from the past 50 years. With an interdisciplinary team of scientists, engineers, planners, and regulatory specialists, Herrera strives to design for healthy communities, ecosystems, and resiliency – promoting a sustainable future. 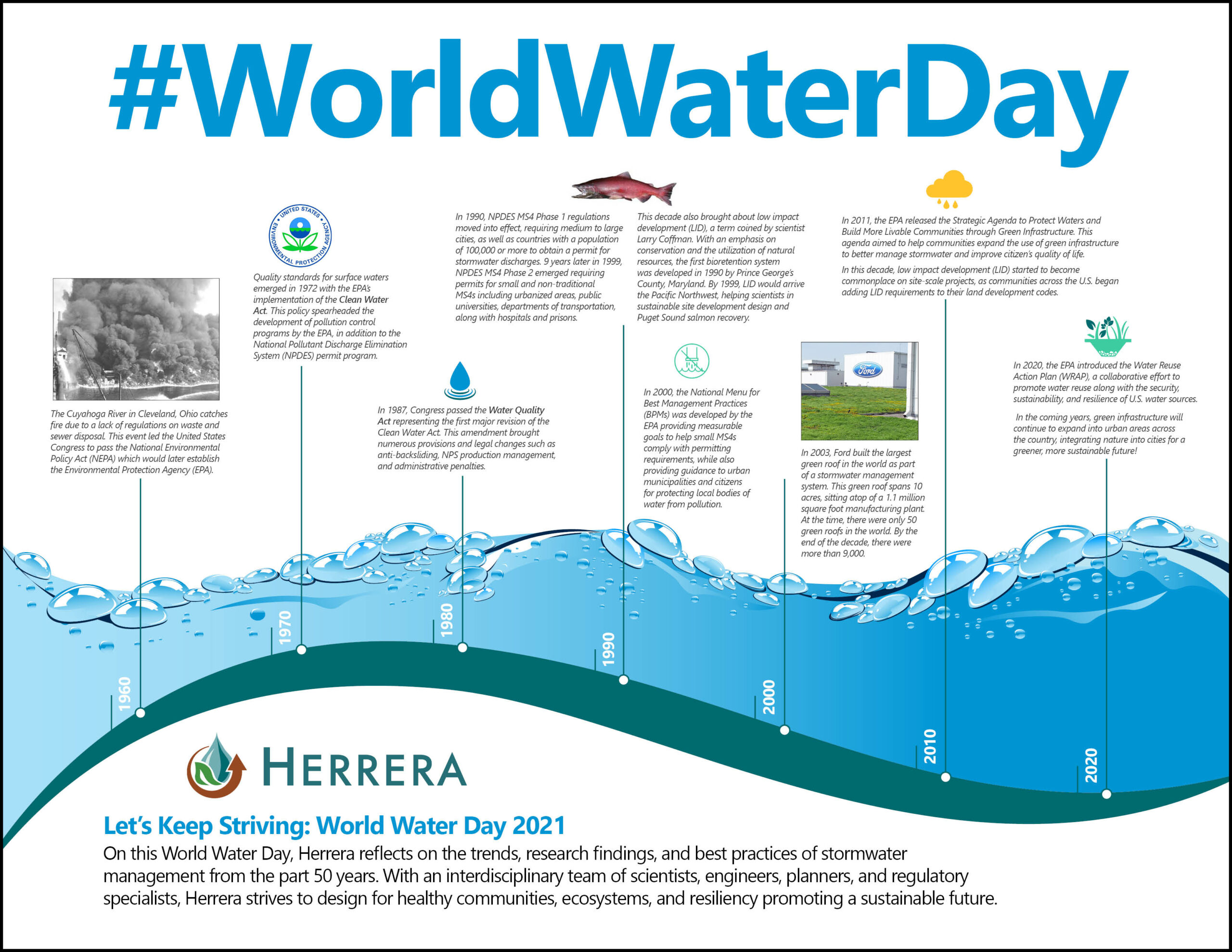 1960s- The Cuyahoga River in Cleveland, Ohio catches fire due to a lack of regulations on waste and sewer disposal. This event led the United States Congress to pass the National Environmental Policy Act (NEPA) which would later establish the Environmental Protection Agency (EPA).

1970s- Quality standards for surface waters emerged in 1972 with the EPA’s implementation of the Clean Water Act. This policy spearheaded the development of pollution control programs by the EPA, in addition to the National Pollutant Discharge Elimination System (NPDES) permit program.

1990s- In 1990, NPDES MS4 Phase 1 regulations moved into effect, requiring medium to large cities, as well as counties – with a population of 100,000 or more to obtain a permit for stormwater discharges. 9 years later in 1999, NPDES MS4 Phase 2 emerged requiring permits for small and non-traditional MS4s including urbanized areas, public universities, departments of transportation, along with hospitals and prisons.

This decade also brought about low impact development (LID); a term coined by Larry Coffman. With an emphasis on conservation and the utilization of natural resources, the first bioretention system was developed in 1990 by Prince George’s County, Maryland. By 1999, LID would arrive the Pacific Northwest, helping engineers and scientists in sustainable site development design and Puget Sound salmon recovery.

2000s- In 2000, the National Menu for Best Management Practices (BPMs) was developed by the EPA providing measurable goals to help small MS4s comply with permitting requirements, while also providing guidance to urban municipalities and citizens for protecting local bodies of water from pollution.

In 2003, Ford built the largest green roof in the world as part of a stormwater management system. This green roof spans 10 acres, sitting atop of a 1.1 million square foot manufacturing plant. At the time, there were only 50 green roofs in the world. By the end of the decade, there were more than 9,000.

2010s- In 2011, the EPA released the Strategic Agenda to Protect Waters and Build More Livable Communities through Green Infrastructure. This agenda aimed to help communities expand the use of green infrastructure to better manage stormwater and improve citizen’s quality of life.

In this decade, low impact development (LID) started to become commonplace on site-scale projects, as communities across the U.S. began adding LID requirements to their land development codes.

2020s- In 2020, the EPA introduced the Water Reuse Action Plan (WRAP), a collaborative effort to promote water reuse along with the security, sustainability, and resilience of U.S. water sources.

In the coming years, green infrastructure will continue to expand areas across the country, integrating nature into communities for a greener, more sustainable future!